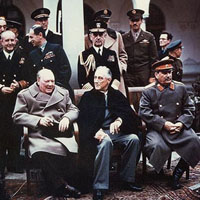 From February 4th to 11th 1945, representatives of the three major Allied countries met to discuss the future of Germany, the actions that should be taken to control it once the war was over, and the further of the United Nations.  President Franklin D. Roosevelt of the United States, Winston Churchill, prime minister of Great Britain and Joseph Stalin of the Soviet Union met in Crimea, a Russian resort town.

The three leaders felt that the fight in Europe was nearly over, and were confident in a victory, but were more worried about the fight in Japan. They feared that fighting in the Pacific theater might continue for an extended period, and the United States and Britain requested Soviet involvement in that conflict. In return for the help, the United States and Britain promised the Soviet Union a sphere of influence over Manchuria, which included access to the railroads, and control over Port Arthur (now Lashunkou).

An important topic discussed in the conference was the role that the United Nations would play. The three allied countries agreed that once freed from German control, France would be involved in the post-war governing of Germany. It was also agreed that Germany should assume some financial responsibility for the war. The countries agreed to split control over Germany between them; Britain and the US promised that parts they controlled should be “friendly” towards the Soviet regime, in exchange for the Soviet Union agreeing to hold free elections.

Poland was an important topic of debate at the conference. The Soviet Union sought control over it, arguing that it had always been used as a gateway to Russia for invading countries, and that without it, they could not be safe. However, the US and Britain were reluctant to relinquish further power to the communist government.