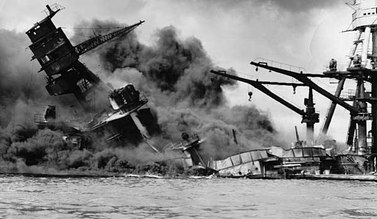 Despite the United States' claims of neutrality, the USA were interfering in the conflicts between Japan and China and Japan and Manchuria. These actions would cause fatal reciprocation from the Japanese. Under the command of emperor Hirohito, the Imperial Japanese Navy conducted a surprise attack on the United States naval force on December 7, 1941, "a date which will live in infamy" (President Franklin D. Roosevelt). Pearl Harbor was the target. The US base was attacked mercilessly, and the 353 Japanese aircraft sunk all of the docked battleships, three cruisers, and three destroyers. Almost 200 American planes were destroyed, and over 2,000 American men were killed. 1,200 were wounded. Japanese losses were very light. The attack was so successful in part due to the absolute astonishment from the American side. Officers were alerted as early as an hour before the attack, but deemed the warning insignificant as nobody was expecting this. This was a fatal blow to the United States' naval power. Nobody was expecting this attack, and it forced the United States in to war with Japan. Because Germany and Italy were allied with Japan, they declared war on America. America declared war back.

This act of aggression opened the curtains of the Pacific Theater. It caused America to renounce its shroud of neutrality and really commit fully to the Allied powers. It also caused much animosity from the United States toward Japan, leading eventually to the atomic bombing of Hiroshima and Nagasaki.