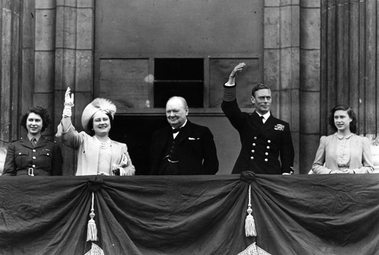 Tuesday, May 8th, 1945 marked the formal end to Hitler’s war and came to be known as V-E Day, or Victory in Europe Day. The end of WWII was slow in coming and came as a surprise to no one. A long string of German retreats and surrenders marked the ever anticipated V-E Day. After the Battle of the Bulge the Allied troops began to move. They started to push the Germans back and back, all the way to Berlin. They crossed the rein on March 7th and overran West Germany before finally turning their attention to Berlin, Germany’s capitol. On April 30, Hitler committed suicide, leaving Karl Doenitz in power. Doenitz immediately sought to negotiate a conditional surrender with the western Allied forces, but England’s Prime Minister, Winston Churchill, demanded an unconditional surrender, or no negotiations. Germany would have to accept all of the Allie’s demands. Doenitz signed the Unconditional Surrender on May 7th 1945 in Commander Dwight Eisenhower’s headquarters in Reims, France. The next day, a second unconditional surrender was signed in Berlin by Field Marshal Wilhelm Keitel. Under the terms of the surrender, Germany had to stop all military actions by 11:01 p.m. on May 8. Although the official surrender was signed on May 7th, the end of the war was not announced until May 8th by the King of England. Spontaneous celebrations erupted all over the allied nations. The great WWII was over.


This day held unimaginable significance to millions of people around the world. It was the end of the 6 year war that spanned the entire world, killing millions of friends and family.