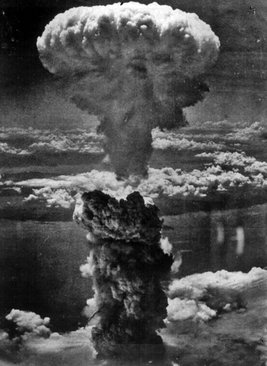 Even after the allies had won in the European theatre, the war in the Pacific theatre was dragging on. By the time the Germans had been defeated in Europe, the Japanese were loosing badly but they refused to surrender. They vowed to fight to the bitter end and therefore became more deadly. In just 3 months during 1945 the number of casualties inflicted by the Japanese totaled almost half of those suffered in the whole war in the Pacific. Millions of people were dying and the US government was becoming desperate, they needed a fast and decisive end to the war. The Manhattan project would give them that. One of the government’s A-bombs and the war would be over instantly. Many of the top military commanders actually favored the conventional method of bombing and came up with a massive invasion plan, called “Operation Downfall”. Unfortunately the calculated casualties from this operation were about 1 million so the government started looking into the nuclear options.

Hiroshima, Japan was the selected first target. As a manufacturing center close to Tokyo it was a likely place. Then at 8:15 on the morning of August 6th 1945 a plane called Enola Gay dropped the bomb nicknamed “little boy” on the city. It exploded 2,000 feet above Hiroshima and released a blast that had the same power as 15,000 tons of TNT and destroying 5 square miles of city. This explosion killed 70,000 people on impact and then another 70,000 later died from radiation poisoning in the next 5 years.

When this first attack did not bring about an immediate Japanese surrender, they began preparing for the next assault. Three days later on August 9th 1945 another A-bomb left the hanger and started towards Japan. This time the plan was to drop it over another industrial center called Nagasaki. At 11:02 am, the second atomic bomb ever to be used was dropped and it exploded 1,650 ft over the city. 40% of the entire city was destroyed and even though this bomb, nicknamed “Fat Boy” was supposed to be stronger then “Little Boy”, the natural terrain of Nagasaki stopped the bomb from doing as much damage. Still, 70,000 people were dead by the end of the year.

After these absolutely devastating attacks, Japanese Emperor Hirohito announced the countries surrender over a radio broadcast on August 15th, 1945, 6 days after the last atomic bomb mission. The Second World War was over! The news spread quickly all over the world and August 15th was nicknamed V-J Day or Victory in Japan Day. Celebrations broke out across all the Allied nations once more and for the final time.

These catastrophic events caused an entirely new era of warfare to appear, the nuclear era. Now countries had the power to completely destroy each other instead of just the soldiers. Now civilians would be in danger just as much as the soldiers. This use of a new weapon changed the way war was fought completely.