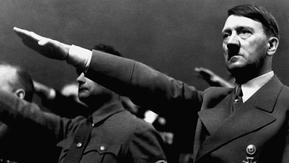 After World War I ended many European countries were struggling, the ones that were the worst off were countries like Germany and Italy who had lost the war and had to pay massive debts back to the other countries who had won. The Treaty of Versailles put a lot of pressure on Germans and in the end they would be left angry and resentful. In the time leading up to the war there was a major shift in governments in both Italy and Germany. The shift was towards fascist regimes. Fascism is a type of dictatorial totalitarian government based on Nationalism.  In 1928 Be­nito Mussolini was elected, with the help of the black shirts, seizing control of the country from the socialists that had been in power before. The election in Italy inspired Adolf Hitler to try to overthrow the German government; he would not succeed in this. Adolf Hitler would have to spend months in prison because of his attempted coup. During the time of his sentence he wrote the book Mien Kampf in which he stated his radical views about the state of Germany and blamed it on the Jewish population. In 1931 Hitler and Mussolini helped get Francisco Franco elected in Spain, and the next year he would be named chancellor of Germany. Hitler’s charisma and promises gave the German people hope that their country would become more economically stable, and that they would once again be a major world super power.

Hitler increased many tensions in Europe with his decision to continuously violated the Treaty of Versailles. The other countries allowed them to do this because of the anti-aggression pact that they had made to ensure that another world war was not occur. The anti-aggression stance would only last until Hitler and Mussolini’s troops began to invade other countries.  Thus began the second World War.