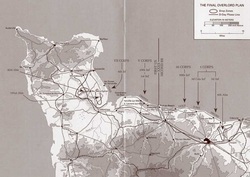 D-Day became the name of the beginning of Operation Overlord, the campaign that the Allied forces launched in 1944 to free France of German control. The campaign started June 6th, 1944 (D-Day) and lasted until the end of August, 1944, at which time the Allied troops had been successful in freeing Paris and pushing the Germans out of France.

Operation Overlord took months of planning, and involved troops from the US, Britain and Canada. Further, officials tried to lead German troops to believe that the point of attack was going to be Pas-de-Calais (the narrowest point between Britain and France) rather than the beaches of Normandy.

The attack was first planned for June 4th, but was delayed by storms.

Around 1 AM, the airborne assault started, five hours before the coastal attack. Paratroopers of the US 82nd and 101st Airborne Divisions, the British 6th Airborne Division and the 1st Canadian Parachute Battalion descended behind enemy ranks. This attack was not very successful; many paratroopers were killed and a great deal of their equipment was lost, but they were successful in confusing German commanders, and occupying the troops.

Utah beach, furthest to the right was not heavily defended. It was not one of the original targets, but was added because of its proximity to Cherbourg, a major port.

Omaha was the most heavily defended beach, and cost the US over 2,400 soldiers. The terrain provided the largest challenge to the soldiers. The beach was overlooked by 100-foot cliffs, and was full of bluffs and draws. From the high ground, the Germans had full control over the beach and tidal flats, and could successfully pick off the soldiers storming the beach. Further, the Germans had five strongholds on the beach, called “Widerstandsnester”. The beach was also armed with pillboxes set to fire east and west, enfilading the troops and remaining concealed from warships. Despite the difficulties, the US was successful in landing 34,000 troops.

Gold beach was stormed by the 50th Northumbrian Division of the British 2nd Army. The British faced fierce opposition in the beginning, but successfully broke through. The success of the British was due in large part to being well-equipped with good armor, and the “Funnies” which were specialist vehicles designed to clear obstacles and minefields safely, thus protecting the soldiers. The primary objectives of this attack were to gain control over Arrolnanches and the road junction at Bayeux, and to establish contact with US and Canadian forces.

Juno beach was attacked by Canadian forces, which penetrated farthest inland of the land forces. Their objective was the airfield at Carpiquet, west of Caen. The Canadian troops suffered moderate casualties.

Sword was the targeted of the 3rd British Infantry Division, charged with reaching Caen and lining up British Airborne forces east of the Orne River. The British were slowed by conflicts inland, and the allied forces were not successful in taking Caen until late June.


The attack on the beaches of Normandy was one of the crucial events that turned the tide of the war against the Axis powers. The allies suffered heavy casualties that day, but were successful in landing large numbers of troops in France, that were able to advance to Paris and free it from German control.
Powered by