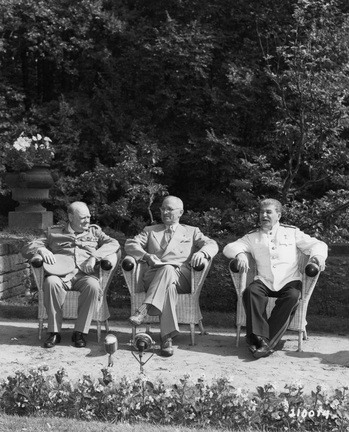 Germany had surrendered, but the work of “The Big Three” had just begun. The Big Three included, Winston Churchill, the United Kingdom’s Prime Minister, US President, Harry Truman, and the Soviet Premier, Joseph Stalin. These men had been delegated to make one of the biggest decisions, what to do with the post-war world. On July 17th 1945 the Big Three gathered at Potsdam, a small suburb near Berlin that had not been bombed and began to hammer out details like how to punish Germany, zones of occupation, creation of a Council of Foreign Ministers, and issuing the demand of an unconditional surrender by the Japanese. This meeting continued until August 2nd, less then a week before the nuclear bombing at Nagasaki and Hiroshima.

At the Potsdam Conference, the Big Three decided to split Germany and Berlin into four occupation zones. The Soviets would get the eastern part and the western part would be split between France, Britain and America. Even though Berlin was settled deep into the Soviet sector of the country, the capitol city was also split between the nations. At this Conference they also decided how much Germany would have to pay in war reparation payments and that any part of German National Socialism would be removed. The public education system of Germany would now have to promote peaceful democratic views and emphasize that the German nation was responsible for the war.

Poland was a major issue for the Big Three. The polish border would have to be redefined and after much discussion, the border was drawn at the Oder River. This meant that Poland lost 70,000 square kilometers of territory due to a decision made by the powers, not by Poland themselves.

This conference determined all aspects of post-war Europe but also set the stage for the Cold War. Communism was already on the rise and this conference gave Stalin and his Soviet Union the push needed to begin their advance of Communism. In Berlin, the border between the east and west became a physical wall as well as the metaphorical wall between Communism and Democracy which wasn’t destroyed until 1990.