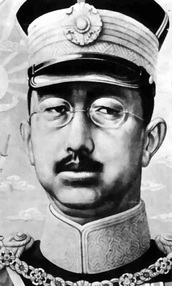 Japan entered World War 2 under the divine command of emperor Hirohito. Japan was already aligned with the Axis powers before World War 2 began, due to similar interests in expanding territory. Hirohito aimed to gain more land for Japan, and these tendencies had been around since the inception of the League of Nations. Japans greed for more land was due to discord and economic recession in the 1920s, so Hirohito yearned for more natural resources. Japan's avarice and military aggressiveness landed them a spot in the top 3 Axis power in 1936, but not with Japan's full consent.  Commander of the Combined Fleet Admiral Isoroku Yamamoto was weary, saying on 14 October 1940: "To fight the United States is like fighting the whole world. But it has been decided. So I will fight the best I can. Doubtless I shall die on board Nagato (his flagship). Meanwhile Tokyo will be burnt to the ground three times. Konoe and others will be torn to pieces by the revengeful people, I wonder. " Isoroku was overwhelmed by the wishes of his Emperor though, and Japan did indeed enter the war with the attack on Pearl Harbor in response to the United States' embargo and perceived threat.

Japan's entry into World War 2 added a strong ally to the Axis powers. Japan's military was exceptionally strong because the soldiers were so loyal to their divine emperor that they would die willingly for him, providing Japan with strategies like Kamikaze attacks. Japan's aggression also forced the United States in to the war after Pearl Harbor.