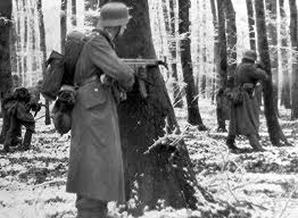 Early on December 16th, 1944, Hitler launched his last offensive battle to try and reverse the bad luck that had been befalling him. His goal was to split the allied armies and drive towards the English Channel. After a hard day of fighting, the German troops broke through the four battle-worn American divisions in the Ardennes Forest. This massive advance gave the battle its name. As the soldiers advanced, English speaking German soldiers disguised themselves as American soldiers and wreaked havoc with the allied forces. They cut communication lines, spread rumors, and captured critical bridges. In their fear, the Belgian townspeople put away their allied flags and took out their swastikas. The citizens of all Allied nations were sobered by the Nazi onslaught. Luckily, the Allied commander Dwight D. Eisenhower sent reinforcements immediately to hold off the German penetration. Within days, Lt. Gen. George S. Patton was attacking the German flank and the American soldiers began to push the Germans back. Many times the American soldiers were isolated and were unaware of the bigger picture but they all did their part and the Nazi’s advance was slowing drastically. The American forces were resilient and refused to surrender to the German’s repeated attacks. Through January, the Allied forces attacked the sides of the sinking ‘bulge’ and were eventually able to drive to victory. This would be the beginning of the end for Hitler and his forces. Never again would he be able to launch an offensive on such a scale.

This historic battle tuned the tides of World War II and began Hitler’s ultimate retreat. It was the beginning of the end for Hitler and his forces. Never again would he be able to launch an offensive on such a scale. After this battle the Allied forces began to push towards Germany.