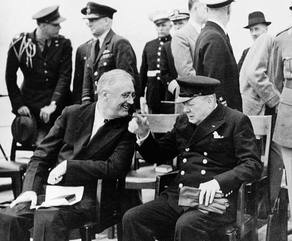 The Atlantic charter was a document that outlined the Allied Powers agenda after the end of World War 2. Britain and the United States created it together, and then it was agreed upon by all of the Allies. There were eight goals detailed in the agreement: No more expanding of territories, no changing of territories, the right to sovereignty , encourage trade to all countries of the world and increase economic prosperity, improved standards of labor and social security, establish peace throughout all nations, regardless of past defeats or what have you, peace on the seas, and global disarmament. These goals were agreed upon and then set in place post WW2. These goals feel very internationalist, or like that of a "world policeman", as it were. The agreement also showed that America was definitely supporting Britain in the war. Both America and Britain wanted to sort of "show off" their unity, such as to show the power of their collective might and intimidate the Nazi regime. Realistically, this was more of a set of guidelines than prospects that were set in stone. Still, it set the stage for post World War 2 global relations, with America and Britain leading the diplomacy crusades around the globe.
The Axis powers reacted to this charter. Tokyo took this agreement as a potential alliance against them, which it pretty much was, so it contributed to the Pearl Harbor incident. In Germany, British aircraft rained down papers that read (I'm paraphrasing here), "Even thought we beat you, you can still have peace and prosperity!". This agreement also heralded the US entrance to WW2.